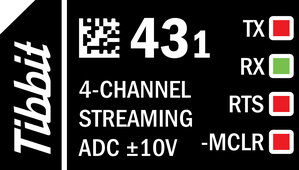 In the single-ended mode, this Tibbit has an input range of ±10V, while in the differential mode it accepts signals in the ±20V range. Both are common output ranges of industrial pressure, temperature, and other types of transducers. If your application requires a wider input voltage range, consider using Tibbit #43-2 instead.

Tibbit #43-1 requires only the main 5V power source. To accept inputs greater than 5V, the Tibbit is equipped with a low-noise, inductorless DC-DC converter generating –14V and +14V from the module's +5V power supply. Since all additional voltages are generated onboard, there is no need for an external dual-rail power Tibbit #12.

An onboard PIC16F1825 microcontroller resides between the ADC and the host CPU of the Tibbo Project PCB (TPP). The microcontroller's firmware implements a simple command interface, accessible via TX and RX UART lines (there is also an RTS flow control line). Dedicated to serving the needs of the ADC and unburdened by any other tasks, the PIC microcontroller enables low-jitter sampling of analog data in the data streaming mode and enhances the linearity and precision of analog-to-digital conversions.

Tibbit #43-1 operates in either command (default) or data streaming mode. The command mode is used to configure the Tibbit's settings (operating parameters) and also to perform single ("spot") analog-to-digital conversions. In the data streaming mode, the Tibbit sends a continuous stream of low-jitter measurements performed at a preset sampling rate. The device is capable of performing up to 1,000 measurements/second when a single channel is enabled. Up to 200 measurements per second per channel are possible when all four channels are used.

The PIC microcontroller's firmware can be upgraded in the system and without any additional external hardware. The firmware update process utilizes the low-voltage programming (LVP) mode of the PIC microcontroller, with the TX line acting as ICSPCLK, the RX line acting as ICSPDAT, and the –MCLR line used to put the microcontroller into the LVP mode. CODY can include a firmware update file in your project and generate code for its execution. The firmware source code and published update hex files are available in a dedicated repository.

For information on the operating parameters of Tibbit #43-1, please refer to Specifications.

Whether Tibbit #43-1 operates in the single-ended or differential mode is determined by the SM command.

In the single-ended mode, the Tibbit provides four input channels. The voltage on each channel is with reference to the system ground; however, the Tibbit does not expose the ground line. This means that when running Tibbit #43-1 in the single-ended mode, you will need to get the ground line elsewhere. One of the common ways is to use Tibbit #43-1 in conjunction with Tibbit #20, which offers the system ground terminal.

The system ground is not needed in the differential mode. However, to reduce the noise, you may wish to connect the signal cable's shield to the TPS ground. This will, again, require obtaining the ground line elsewhere.

Although Tibbit #43-1 features an RTS line, it does not have a CTS line. The reasons for the absence of the CTS line are that (1) there is no spare pin to accommodate this line, the fourth I/O interface line of the Tibbit being taken by the –MCLR pin; and (2) flow control in the host CPU-to-Tibbit direction is unnecessary. Large volumes of data potentially requiring flow control can only flow from Tibbit #43-1 to the host CPU. Only commands are ever sent in the opposite direction. All commands are short, and Tibbit #43-1 will always receive them reliably.

When enabling flow control in your application, remember to map the CTS line to the NULL line (ser.ctsmap = PL_INT_NULL).

Control lines A through D are each equipped with an LED. The RX line is equipped with a green LED, and all other lines have red LEDs. An LED will turn on when the state of its corresponding line is LOW.

Tibbo supplies a companion software library for Tibbit #43-1 that takes care of calculations and conversions for you. The library can be easily included in your project through CODY, Tibbo's hardware configuration and project code generator. CODY examines your TPS configuration to create the starter code — adopting Tibbo's best coding practices — that you can use as your project's foundation.